Redman is the romantic pairing of Red McArthur‎‎ and Eric Cartman.

The origin of this pairing is unknown. The two rarely interact and could be considered a crack pairing.

There are very few fanfictions that include this pairing.

For a brief period, it had some popularity at the South Park Studios message board as some felt it would be an opportunity to flesh out Red's character and offer the then-new dynamic of Cartman having a girlfriend, but this movement died down. Cartman would later date Heidi Turner instead, taking away the novelty implied. 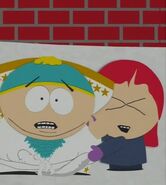