View source
watch 01:36
We're Getting Mutants in the MCU - The Loop
Do you like this video?
Play Sound

Cartbe is the romantic pairing of Eric Cartman and Bebe Stevens. Despite having interacted a few times in the show, this could be considered a crack pairing.

In the episode "Bebe's Boobs Destroy Society", Cartman and the rest of the fourth grade boys became attracted to Bebe because of her breasts. Cartman invited Bebe to his house - much to the chagrin of the other boys - where they played out The Silence of the Lambs with Cartman's toys.

The pairing often takes a backseat to more popular pairings such as Heiman and Kybe, and if it is used it is just to pair the spares. There are very few fanfictions that include this pairing, and has almost faded to obscurity.

As of July 17 2021, nine stories are tagged with this pairing on Archive of Our Own 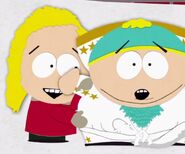 The pair in a promotional image for "Bebe's Boobs Destroy Society."

Bebe next to Cartman booing Wendy