View source
watch 01:36
We're Getting Mutants in the MCU - The Loop
Do you like this video?
Play Sound

Fans believe that this pairing can be considered a crack pairing (because Butters and Kenny have made little interaction with each other) while at the same time, other fans believe this pairing is one of the cutest ones. The origin of this pairing is unknown as the two had not properly interacted with each other on-screen until Season Sixteen's "Going Native". Despite this, however, fans still believe there to be various small hints of a romantic relationship possibly existing between them prior to this episode.

The pairing also may have been suggested as when Butters took Kenny's place when he died, leading to the idea that they should interact more often, though that didn't really happen. Many tend to criticize the ship as Kenny several times has shown an attraction towards girls, and for a long time their lines were limited to talking about women, breasts and sex with women, but his friendship with Butters cannot be denied.

The following are scenes and interactions that supporters of the ship have interpreted as 'hints'. 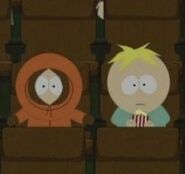 There are many fanfictions and fanart that include this pairing. While it has always seen popularity, it became much more significant after the episode "Going Native" first aired and confirmed their friendship.